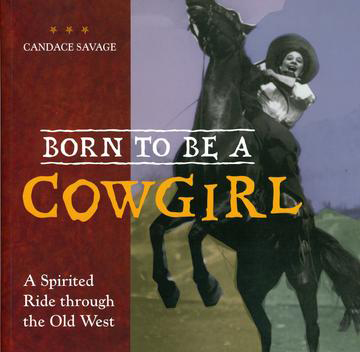 Born to Be a Cowgirl

A Spirited Ride Through the Old West

The book begins with the opening of the Canadian and American West in the 1870s, builds to the 1940s when predominant moralism reined the golden age of the cowgirl to a halt; and closes with modern examples of these spirited women. Savage’s narrative uses a lively, prancing tone to tell the story of Western women who looked after cattle either by choice or circumstance. Often using diaries, Savage shares exciting first-person stories. She also talks about cowgirl gear and technique, all with a refreshing attitude. “Although people sometimes made a fuss about ‘men’s’ and ‘women’s’ work,” she writes, “the cattle did not care.” The author gracefully brings in urban, rural, and First Nations perspectives, themes that might have dwindled in the dust in the hands of other writers. The more than 40 historic photos provide an exceptional glimpse into the lives of women and girls. However, the author doesn’t directly discuss these women as working mothers. For example, the caption for an amusing photo of cowgirl Tad Lucas’s baby cradled in her 10-gallon hat was a missed opportunity: Instead of telling us how the baby’s birth affected Lucas, we learn about how useful the hats were in protecting riders from the elements.